We started at 4:15am with two owling stops on Hicks Road and McAbee Road, which netted us NORTHERN SAW-WHET OWL and WESTERN SCREECH-OWL. Great Horned Owls were silent all morning.

We went to the John Nicholas trail for the dawn chorus, where PACIFIC WRENS were plentiful.

Oka Ponds and Almaden Lake yielded their expected collection of regulars, including GREEN HERON and WILSON's SNIPE at Oka and a good gull flock at Almaden.

We were unable to find CHIPPING SPARROW at Jeffrey Fontana park where Janna Pauser had pointed it out to us a week earlier.

We enjoyed the scenery at New Almaden and Fortini Trail (both sites new to us) while picking up RUFOUS-CROWNED SPARROW and CALIFORNIA THRASHER.

We used mid-day to crank through a series of short stops for staked-out birds in the south county, including BLUE-WINGED TEAL and HORNED LARK in Morgan Hill; BALD EAGLE and ROCK WREN at Anderson Reservoir. We we struck by seeing CASPIAN TERN at three different sites during the day.

By late afternoon, strong winds at Ed Levin County Park and Alviso Marina made both stops difficult for listening and generally unproductive, although we did manage to hear one short burst from a VIRGINIA RAIL at the Marina.

We almost called it a day when a MERLIN spooked all the shorebirds at the Palo Alto yacht harbor mudflats, but we hung in long enough to find a Cinnamon Teal behind the Lucy Evans center for our last bird of the day at 8pm. 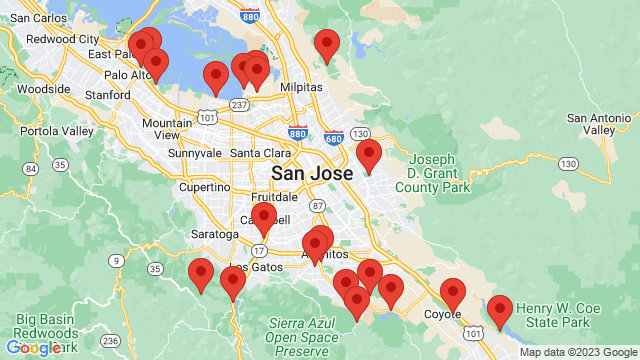