Team Motto: Takin' Care of Business
SUMMARY
For an Alameda County Big Day, our three person crew met up in Bob's driveway at 2:30 AM. By 2:55 we had our first bird: Great Horned Owl calling at Redwood Regional Park. At 8 pm we wrapped up with bird #128, a Common Tern at Berkeley Marina. Our first warbler of the day, found at Del Valle Regional Park, turned out to be the bird thatfollowed us throughout the county -- Yellow Warbler. On reveiwing the ABA rules, we find that we can count our 3 partially seen birds for a Grand Total of 131 species or 52.610% of Alameda County.

Site-by-site notes
Our itinerary was heavily researched and frequently rearranged duringthe four weeks between coming up with the idea to do a big day and ourchosen date -- chosen because it was the only free day in our calendars inside the SFBBO Fall Challenge period. We'll be using these notes to enter our total in the Fall Challenge contest and forplanning our next Alameda Big Day.

2:55 - 4:15 am - Redwood Regional Park
Much quiet listening and tape playing only turned up two owl species -Great Horned (between 2 and 6 individuals) and Western Screech (4individuals). A slow start.

4:45 - 5:40 Arrowhead Marsh
Walking in the back way let us look at Black-crowned Night-heron,Mallard, Mourning Dove and Great Egret in the dark on our way to theRail Spot, where both Clapper & Virginia Rail obliged, but Sora and(elusive?) Black Rail did not.

6:45 - 7:00 Mines Road
A quick pullout turned up California Thrasher and Rufous-crownedSparrow. One of our biggest scouting successes was knowing where togo to get these dry, interior species quickly.

7:00 - 8:30 Del Valle Regional Park
A great spot for dawn - and we chose the specific stop inside the parkbased on email sent to the EBB mailing list the night before. Our"species per hour" average jumped way up, as we entered Del Valle with21 species (that's four per hour) and left at 8:30 with 53 (slightlyover ten per hour). Specialties of the location were : Wilson's Snipe, Red-breastedSapsucker, Downy Woodpecker, Spotted Sandpiper, Osprey, Yellow-billedMagpie and Green Heron.

8:45 - 9:00 - Murietta's Well
This quick stop for a specialty bird did not go as planned. We leftwithout the Eurasian Collared Dove, but traded that miss for a WesternTanager. And Yellow Warblers.

9:15 - 9:30 - Owl Road
Another great scouting success - knowing where to find a BurrowingOwl, Say's Phoebe, Loggerhead Shrike and (possible) Golden Eagle wasvery helpful in picking up 6 species in about 15 minutes. Onward!9:55 - 10:10 - Tassajara Creek park
Reported on EBB, this park was another quick dive into known birds,turning up two good warblers and a House Sparrow.

The large pond south of the parking lot obliged with a couple of duckspecies we hadn't gotten at Del Valle - Greater Scaup, Ruddy Duck, andNorthern Pintail - along with an Eared Grebe.

The long walk out to the main shorebird roost was wearing -- some ofus were dragging a bit by this time. But the payoff was *huge* withlarge flocks of Western Sandpiper and Black-bellied Plover harboringsmall numbers of Sanderling (10ish), Ruddy Turnstone (3), BlackTurnstone (1), Red Knot (20?), and Surfbird (1). Hundreds of MarbledGodwit scanned failed to turn into Long-billed Curlews. On the walkback, we heard, but never saw, Horned Larks on top of the active trashheap and Bob spotted a single fly-by Whimbrel. We probably spent moretime than we should have trying to spot the Horned Larks, but theywere soooooo annoying close and vocal, it was hard to resist

2 pm - 3:30 pm Coyote Hills
The butterfly garden had a Western Woodpewee and American but not Lesser Goldfinches (a miss for the day). An adult Cooper's Hawk landed on a pole just beyond the gardens and there wasn't much feeder action after that! Rock Wren failed to appear on our way out to the ducks overlook, but Green-winged Teal, American Wigeon, and Common Moorhen were located amongst hundreds of eclipse Northern Pintails -- and seen by Bob & Bill but missed by Mary, rats! The arrival of a Lark Sparrow (once again, credit to Bob!) was a consolation prize.

3:50 - 4:15 - San Leandro Marina
Drove up to San Leandro and found the Pectoral Sandpiper which Bob had discovered while scouting the day before. The sandpiper was on the island breakwater, but the tide was so low at this point that the "island" was acessible to the humans, and no terns were hanging around.

4:30 - 5:00 - Alameda shore
Parked near the beach at Alameda South shore, where Bob spotted two Elegant Terns heading away -- which Bill & Mary could not pick up. Picked up Long-billed Curlew, but no Sora. Elected to cut this stop short in order to return to the redwoods, since our "likely" list had 8 redwood species left on it.

5:30 - 6:30 - Chabot observatory
Another highly successful stop brought morale back up after a mid-afternoon slump amongst the smaller animals in the expedition. In 10 minutes, we picked up Townsend's Warbler, Pygmy Nuthatch, Dark-eyed Junco, Steller's Jay, Brown Creeper, and Hairy Woodpecker in the first 10 feet of the trail. Only Mary saw the Band-tailed Pigeon flyover, so we can't count that on the list, but another 15 minutes' work brought us Red-breasted Nuthatch and Hutton's Vireo. A second stop for chaparral netted us a Wrentit. Now we were at 127 species and had our eyes on 130. We dashed back to the shore to try our luck.

7:00 - 7:45 pm - Cesar Chavez Park
We headed north along the road towards Cesar Chavez park near Berkeley Marina. There was one Clark's Grebe visible in the water -- but none of our hoped for comormants or scoters. We did find at least one Common Tern, but were unable to scare up the Barn Owl from the kite flying park. We had to close our day with 128 species. A more energetic team would surely have tried another stop for Pelagic Cormorant or maybe Sora back at Arrowhead, to boost the total, but we were cooked on both sides and had to call it a night.

Our day ends with 128 species for the team - a perfect square - and a feeling that we did "pretty well" for our first Alameda Big Day, but we want another shot!

POSTSCRIPT: A big day is not over until the list is discussed & retallied at length and the rules reviewed. ABA Big Day rules allow species to be included in the Grand Total even if they are not seen by all observers. We had five species in that category -- Elegant Tern, Black-headed Grosbeak, Common Moorhen, Violet-green Swallow and Band-tailed Pigeon -- and a review of the rules shows that these all count, not just the ones seen by a majority of ht team. We were allowed 6 species not seen by the whole team -- so all 5 of our "partials" count. This increases our total to 131 for the trip and that's the total we will be reporting to SFBBO. 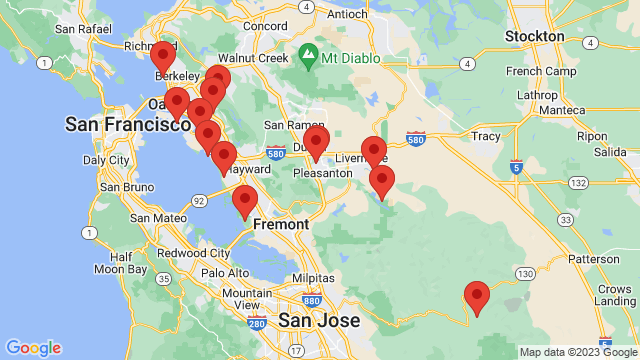