Mary and Bill teamed up with Dick Carlson to do this trip as a fund-raiser for the San Francisco Bay Bird Observatory. It is our largest single day species total ever. Here's how the day unfolded:

5:00am Found the list I wrote myself last night about what to do this morning, with helpful items like "feed cat" and "eat breakfast"

6:00am We're in Dick's car, headed for the coast. The new plan is to hit the coast first, then work back toward the bay side.

6:45am In the pre-dawn overcast we spot our first species -- a Great Horned Owl posing out in the open on a telephone wire. It seems an auspicous start to the day.

7:30am, Pigeon Point Lighthouse. A huge raft of Common Murres floats serenely as dozens of cormorants speed by. No warblers in the trees near the hostel.

8:20am On the way to Gazos Creek we spot our first of eight or ten Red-shouldered Hawks for the day.

9:00am, Gazos Creek Road. We've hit the warbler jackpot! These trees are teeming with chickadees, vireos, warblers. After much debate, we decide that we're seeing both Warbling and Philadelphia Vireo.

10:00am, Ano Neuvo State Park. Dick leads us in the secret back way to a beach overlook were we are greeted by one of the largest flocks of Western and Clark's Grebes any of us can remember.

11:00am On our way to Pescadero Beach, we pull of the road to look at a raptor, and notice a dozen Tricolored Blackbirds posing conveniently on the telephone wire directly overhead.

11:40am Immediately upon setting up the spotting scope at Pescadero Beach, eight mergansers hove into view around a bend in the creek. We decide its lunch time.

1:00pm We've finished lunch at Duarte's in Pescadero, and are much revived by the Cream of Artichoke Soup. We've seen over sixty species before lunch, and are feeling good about hitting our goal of one hundred species today. Before returning to Pescadero Marsh, we drive around the town itself. During a brief roadside stop, Mary and Bill see their first Pygmy Nuthatch. A local birder invites to stop by her delightful garden, where we get great looks at Say's Phoebe.

2:30pm, Pescadero Marsh. There are only four kinds of ducks here, but we've also rounded out our list of herons and egrets.

3:00pm Mezza Luna. Dick introduces to the famous "Mezza Luna Willows" behind the restraurant in Princeton-by-the-Sea. These trees, like the ones at Gazos Creek, are teeming with life.

4:00pm, Pillar Point Harbor. Finally, some Terns! We add Elegant Tern and Surf Scoter to the list and decide to head back over the hills.

5:30pm, Redwood Shores Radio Towers. Dick is right, this pond is amazing at high tide. Amongst hundreds of Godwits, Dowitchers, and Curlews, Dick shows Mary and Bill their first Red Knot outside of the Monterey Bay Aquarium aviary. We also enjoy great looks at Pectoral Sandpiper.

6:15pm Another unlikely but crowded pond is located directly behind the Silicon Valley Athletic Club. We add American White Pelican to the list.

7:00pm As the sunlight fades, we stop at the East Palo Alto Baylands, one of Dick's favorite bicycle destinations. We round out our list at 115 species with the distinctive calls of Clapper Rail and Sora. 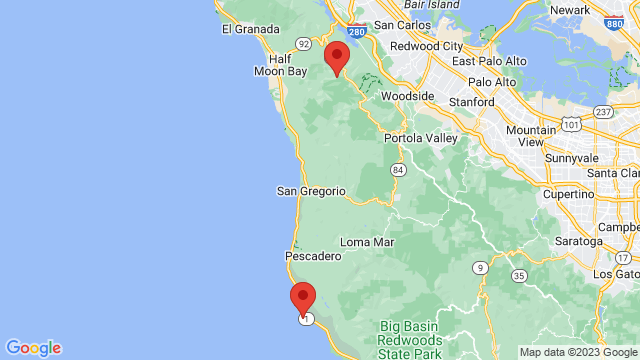